Welcome to a New Year, a new decade, and a new ingress of Mars into Sagittarius. As reported in this column several times in the past, the passage of Mars through Sagittarius-Capricorn has a remarkable correspondence with major crises erupting in the Middle East, and often corresponding with a period danger and threats to Israel from her neighbors, or from within.

END_OF_DOCUMENT_TOKEN_TO_BE_REPLACED

NOTE: THERE IS NO WEEKLY COLUMN THIS WEEK. WE ARE STILL ON A HOLIDAY
VACATION.

However, we thought it would be a good time to review our MMA Daily subscription reports for
active traders, as we ended the year with very profitable trades on stock indices and precious metals.

REVIEW: BEST TRADES AND WORST TRADE OF THE YEAR

END_OF_DOCUMENT_TOKEN_TO_BE_REPLACED

NOTE: THERE WILL BE NO WEEKLY COLUMN NEXT WEEK. We will return January 3. From all of us at MMA, to all of you from around the world, thank you for your support of this weekly column for the past 21 years. Best wishes for a wonderful holiday season, and a most prosperous and Happy New Year! It’s going to be a big year in terms of the cosmic patterns. Three conjunctions of the outer planets in Capricorn! As outlined in the Forecast 2020 book, it’s a year for Heroes and Villains. Be brave and honest, and choose your actions with a sense of their consequences, as a hero would.

Markets are shrugging off the impeachment of President Donald Trump because he is not expected to be removed from office, and there should be no negative impacts on fiscal or monetary policy as a result. Investors have instead focused on recent positive developments, like the trade agreement being worked out between the Trump administration and China, which should stop some strains on the economy and earnings. “Trump needed his victories. He’s got NAFTA, we got a China deal, and we got a budget. He got all these victories while he was under impeachment,” said Daniel Clifton, head of policy research at Strategas.- Patti Domm, “Here is Why the Stock Market is Ignoring Trump’s Impeachment by the House,” www.cnbc.com, December 19, 2019.

END_OF_DOCUMENT_TOKEN_TO_BE_REPLACED

Not bad for a Friday the 13th. The holiday season known for “giving” was very much in evidence last week as a lot of good things happened for financial markets. For one, the Fed announced that it would leave rates steady for the indefinite future, or until inflation shows signs of rising beyond the boundaries the Fed has established as “in control” for more than just a short-term. It was an unspoken understanding that they would not move rates at all during the upcoming election year. However, they probably are not aware that between May 13 and June 25, 2020, Venus will turn retrograde, a time when they (or other central banks) often change their policies with unexpected announcements of policy changes.

END_OF_DOCUMENT_TOKEN_TO_BE_REPLACED

The jobs market turned in a stellar performance in November, with nonfarm payrolls surging by 266,000 and the unemployment rate falling to 3.5%, according to Labor Department numbers released Friday. Those totals easily beat the Wall Street consensus. Economists surveyed by Dow Jones had been looking for solid job growth of 187,000 and saw the unemployment rate holding steady from October’s 3.6%. Average hourly earnings rose by 3.1% from a year ago. “Bottom line, America is working,” Larry Kudlow, director of the National Economic Council, told CNBC’s “Squawk on the Street.” “These are very strong numbers.” – Jeff Cox, “Jobs Growth Soars in November,” www.cnbc.com, December 6, 2019.

END_OF_DOCUMENT_TOKEN_TO_BE_REPLACED

China threatened to retaliate after President Donald Trump signed two bills into law in support of Hong Kong protesters. “China firmly opposes Hong Kong Act. We have made stern representations & strong protests to U.S.,” Geng Shuang, a spokesman for the Chinese Foreign Ministry, said in a briefing Friday. “It is a stark hegemonic practice & a severe interference in Hong Kong affairs, which are China’s internal affairs. China will take strong counter-measures.” Investors fear the signing of these measures could complicate negotiations as a key Dec. 15 deadline approaches. If a deal is not reached by then, an additional round of U.S. tariffs on Chinese products would take effect. – Fred Imbert, “China Threatens to Take ‘Strong Counter-Measures’ Against U.S. After Hong Kong Bill Signings,” www.cnbc.com, November 29, 2019.

END_OF_DOCUMENT_TOKEN_TO_BE_REPLACED

Note: The U.S. will celebrate its Thanksgiving holiday on Thursday, November 28. U.S. Markets will be closed that day.

The trade war initiated by President Donald Trump isn’t helping, Yellen said. For the past year and a half, the U.S. and China have been lobbing tariffs back and forth on billions in goods as part of the White House’s efforts to level the global playing field and halt the theft of technology and intellectual property. “I see no sign that that’s been successful in turning around these trends,” she said of the protectionist trade actions. “These tariffs are taxes on American consumers and businesses. It’s making it more difficult and more expensive to do business, to control costs, and consumers are seeing higher prices from it.” – Jeff Cox, “Janet Yellen Says ‘There is Good Reason to Worry’ About the US Economy Sliding into a Recession,” https://www.cnbc.com, November 21, 2019.

END_OF_DOCUMENT_TOKEN_TO_BE_REPLACED

The Wall Street Journal first reported the roadblock in the trade talks, adding China is hesitant to commit to a specific amount of agricultural products in the context of a potential deal. China has agreed to buy up to $50 billion in U.S. farm goods as part of the so-called phase one trade deal, President Donald Trump claimed last month. Stocks rapidly pared gains following the news. – Yun Li, “US-China Trade Talks are Getting Held Up Because of Disagreements on a Number of Issues,” https://www.cnbc.com, November 13, 2019.

END_OF_DOCUMENT_TOKEN_TO_BE_REPLACED

THE UNITED STATES AND ITS PRESIDENT IN 2019 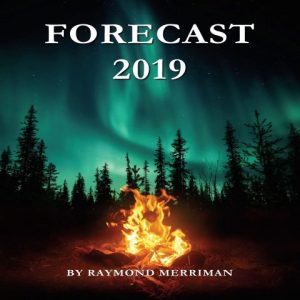 To show what type of content is covered in our annual Forecast Book, we have reprinted a full chapter from the Forecast 2019 Book below. This chapter was written in November 2018, about one year ago. See the chapter, where I have added in my current thoughts in red, which show how my forecasts have unfolded for the President. If you wish to view and download a PDF of the chapter, with additional highlights and graphics, please click HERE. This chapter will give you an idea of what to expect in next year’s Forecast 2020 Book, coming out on December 16, 2019. It’s going to be quite a year for the United States and President Trump and Forecast 2020 will give you a glimpse of what to anticipate in the 2020 Presidential Election. The book will also cover financial markets, the importance of the 2020 Capricorn Stellium, and the geocosmic critical reversal dates for 2020. Enjoy this chapter from Forecast 2019 along with my commentary!

END_OF_DOCUMENT_TOKEN_TO_BE_REPLACED

Beijing’s statement Thursday that the U.S. and China have agreed to roll back tariffs as part of a “phase one” trade accord lifted financial markets, but questions remained over how much ground – if any – the Trump administration has agreed to give. – Josh Zumbrun, William Mauldin, and Chao Deng, “Chinese Say Deal is Set, but Hurdles Remain,” Wall Street Journal, November 8, 2019.

President Donald Trump said Friday he has not agreed to scrap tariffs on Chinese goods, dampening hopes about a coming resolution to a jarring trade conflict. “They’d like to have a rollback,” he told reporters. “China would like to get somewhat of a rollback, not a complete rollback because they know I won’t do it.” Stocks fell to their session lows following Trump’s comments. – Jacob Pramuk, “Trump Says He Has Not Agreed to Roll Back Tariffs on China, After a Week of Trade Optimism.”