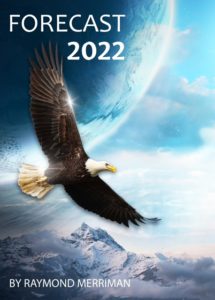 Every year gets better and better with our forecasts. Although 2021 is not yet over, several forecasts made in the 2021 book have already unfolded. We will list a few of the forecasts below as of July 21. Keep in mind these forecasts were written in October-November 2020, and published December 2020, well before 2021 got underway.

ECONOMIC AND MARKET FORECASTS FOR 2021 (made prior to December 1, 2020)The U.S. Stock Market and DJIA: “… There are reasons to support a continuation of the bull market off the lows of March 2020… The next sign of potential trouble for the bull market in the U.S. stock market will happen if and when the DJIA takes out support at 25,000–26,000. Until then, our advice for investors is to stay with bullish strategies. That is, buy corrective declines (even if sharp) into the 50-week and 16.5-month cycle lows due in 2021. But as long as the DJIA does not fall below 25,000–26,000, it is probably a buying opportunity.” The DJIA never traded that low. Instead, it continued to rally and as of this writing, it has made a new all-time high above 35,000 as of May 10 and July 16. The S&P and NASDAQ have continued making new all-time highs in July as well.

T-Notes and Interest Rates: “Between the Saturn–Pluto conjunction, the Jupiter–Pluto conjunction, the U.S. Pluto return in 2021 –2023, and the Jupiter –Uranus and Saturn –Uranus squares in 2021, the stars suggest that this multi-decade bull market is closer to its end than to its beginning. In the likely event that the March 2020 high at 140/24 was the long-term cycle crest, we could anticipate T-Note prices to decline into the 125-132 range at the least in 2021… If the March 2020 high was the 3-year cycle crest, though, then we could expect a corrective decline to 129-132” The low of the year as of this update has been 130/25 on April 5.

British Pound: “The bullish 16-month cycle crest should manifest in January-July 2021, which would be tailed by the 16-month cycle bottom sometime March-November 2021… our first intermediate-term event is expected to be a 16-month cycle crest, forecasted to occur in the time frame January-July 2021, with a price target span of 1.3146-1.5335. The intermediate-term cycle crest should be followed by a 16-month cycle low, estimated to manifest sometime March-November 2021, at a decline of 4.42%-12.58%.” Spot on. The high was 142.35 on February 24, right in the center of the price range given. The Pound continues to decline to the low of the year as this is being written in late July. So far the decline has been 4.67%.

Corn: “Corn prices likely formed an 18-year, 9-year, 6-year, and distorted 30-month cycle low in April 2020 at 309. Coupled with Uranus in Taurus and a pending Saturn-Uranus square, our analysis suggests that 2021 should be a very bullish year for grains.” Without a doubt. Corn soared to a high so far of 775 as of this writing.

Soybeans: “Soybeans are likely not even through their first year in multiple long-term cycles, including the 16.5-year, 8-year, and 5.5-year cycles. As such, this grain is in the early stages of multiple long-term cycles, when markets are at their most bullish. In short, this means 2021 should prove to be a very bullish year for soybeans. The odds of this would increase greatly, especially if prices can close above 1175 on a monthly level…. However, with Uranus in Taurus, and especially with the incoming square from Saturn in 2021, prices could go even higher to test prices in the 1750 +/- 20 area.” Indeed, Soybeans took off too, with the highest price as of this writing being 1677 on May 12.

COVID-19: “This suggests a return to more “normalcy” within three months of February 2021 – after Neptune leaves its opposition to the Uranus/Pluto super charged degrees.” Also, “All of these studies indicate that by spring and summer 2021, businesses and social activities are opening up and there is likely a sigh of relief from the world’s collective by then.” In the U.S., the second wave of the pandemic peaked in February 2021. By late spring, business and social activities throughout much of the world opened up and began returning to normalcy.

Travel, Leisure and Social Activity: “Travel for leisure and social or family activity will increase now that Jupiter is leaving Capricorn and separating from Saturn in 2021. Airlines will begin to come back after the Capricorn stellium and Grand Conjunctions of 2020.” Airlines are once again experiencing full capacity after struggling in 2020 through the first 3-4 months of 2021. Now they are filled as people want to travel again.

Sports Return: Jupiter and Mars rule sports. Aquarius rules large gatherings of people. After both Saturn (restrictions related to the size of group gatherings) and Jupiter (fun, sports, social activities) leave Capricorn (restrictions and bans), stadiums are likely to fill up again for sporting events. That for sure is happening now, and especially since March-April 2021.

Protests: Peaceful versus Dangerous and Life-Threatening: “… the dangers of Saturn in Aquarius (the sign is ruled by both Saturn and Uranus) (include) civil unrest, disobedience, protests turning deadly and into destruction of property, and even revolutionary movements against authoritarian leadership.” Major protests have been erupting in 2021, starting with the storming of U.S. Capital in January in which people were killed. Now we have Hamas firing rockets on Israel and Israel retaliating and again, scores of people are killed. Also, large riots and protests have exploded in Russia over the handling of dissident Alexei Nalvany, in Australia and UK (violence against women), Bolivia, Brazil, Columbia, Hong Kong, Myanmar, Netherlands, Pakistan, Spain, Turkey, and Yemen, to name a few. These have been over demands for freedom and democracy as well as women’s rights and against restrictions imposed due to COVID-19, and also tax revolts.

Bitcoin: “The possibility of a boom/bust pattern in Bitcoin related to Uranus in Taurus is present. Our observation is a market will appreciate 5–8 times (or more) above its low preceding the “boom” part of a boom/bust cycle, and sometimes much more… The transit of Uranus in Taurus further supports the idea of a rising Bitcoin. Not only is that combination suggestive of a boom/bust cycle for cryptos like Bitcoin, but because it will trine the natal Sun of the Bitcoin chart, it identifies a period when it may be most prone to explosive rallies… These studies show the potentiality of Bitcoin soaring in price next year. Yet, they also indicate the vulnerability of loss through activities of intruders who are not abiding by the rules. They are breaking the law (Neptune and Saturn), causing a loss of faith in cryptocurrencies’ safety and stability as a legitimate currency.” At the time this was written. Bitcoin was trading around $13,000. It soared to nearly $65,000 by late April, and then lost over 50% of its value by late May.

EXPLOSION IN GRAIN PRICES: “Taurus is one of the signs ruling foods. In particular, Taurus rules foods grown on farms, like grains, such as Corn, Wheat, and Soybeans. Here, we see the pattern associated with a boom/bust cycle…” Corn, Soybeans, and Wheat have risen to their highest levels since 2013 as of May 2021. Corn is testing $8.00/bu, Wheat $7.75, Soybeans traded above $16.50.

INFLATION: “This would furthermore indicate inflation may soon be on the way. It usually starts with commodities, and Wheat is one of the founding fathers of commodity markets.” As of this writing, April’s CPI numbers were the highest since September 2008.

WINTER (DECEMBER 21, 2020-MARCH 20, 2021): “The Ascendant (in thew Winter Ingress, Washington D.C.) is 29° Scorpio, conjunct Joe Biden’s natal Sun and Venus, so he may be favorably highlighted this season, especially if he wins the 2020 election (this part was written in August 2020). In the last degree of Scorpio, it is the end of an era. But the old force doesn’t go out easily. It has to make a statement of revenge or retaliation. But once the transition takes place, then Venus is rising is Sagittarius. This lends an air of cooperation and agreements, especially in trade deals with other nations.” Biden’s first 100 days in office were considered a great success for both the nation and himself. However, just before he was inaugurated, the storming of the Capitol on January 6 revealed the revenge and retaliation of former President Trump and his supporters over their unwillingness to accept the loss of the election.

Also, related to the Winter season and specifically January 2921, “All of these aspects signify the momentum of a new change, and the resistance to it by different groups, some of which may have anarchy, social disruption, and chaos on their agenda. It seems that whatever party won the election, the other side is not willing to accept the result and chooses to act out its disapproval.” Again, the insurrection and attack on the Capital fits this analysis and its timing very well.

SPRING 2021: “This is a very hopeful (spring) chart because Jupiter is rising, conjunct the Ascendant, at 21° Aquarius. This combination relates to optimism (Jupiter) about the future (Aquarius). It portends exciting news about trade and travel (Jupiter), innovation, and technology (Aquarius), and it may be favorable for the housing market.” COVID-19 travel and social and business restrictions are lifted in the U.S. and the housing market is exploding.

And of course, the all-important Critical Reversal Dates. Many of the 2020 critical reversal dates given for various markets have been impressive, and several have coincided with yearly highs and lows so far in various financial markets such as Gold, Silver, T-Notes, currencies, Crude Oil, Soybeans, Wheat, and Corn. Please note the critical reversal dates in the Forecast 2021 Book will return to their previous listing under each market.

Following last years lead, we will continue to break the Forecast Book down into two publications. That is, we are going to continue our Forecasts for the world and the nation, with our cyclical and geocosmic analysis of social, cultural, political, and economic trends, combined with our analysis and forecasts for financial markets just like always – stock markets, Gold, Silver, T-Notes, Currencies, Grains, Crude Oil and Bitcoin. Plus, we will include our three-star geocosmic critical reversal dates for each market in its own section.

What changed last year and will continue this year is the section on Sun Signs. I won’t be writing that any longer.  Sun signs are entertaining, popular, and many find it to be of great value and personal interest. But it doesn’t belong in the Forecast book which addresses serious world and mundane concerns via serious research and analysis.

We will offer individual Sun Sign forecasts in a separate publication called Trends for the Twelve Signs  for those who wish to have that analysis too. And once again, I will have a little help from my friends in the creation of the MMA Sun Sign book. It will be written by Antonia Langsdorf. You will still receive my analysis of the Sun signs, with an upgrade moderated by Antonia’s skills, which will also include a section on health, in addition the one’s business and relationships outlook.

The Forecast 2022 Book will be the same price ($55 before discounts) as it has been for the past 10+ years. But it will no longer include the 30+ pages of Sun signs in the back section of the book. That will now be available in a separate book,  Trends for the Twelve Signs 2022. It will contain about 150 pages, and the cost is $25 plus postage. And if you order early, and with the standard Forecast 2022 Book, to create the Forecast 2022 Ultimate Bundle, you will receive an additional discount.